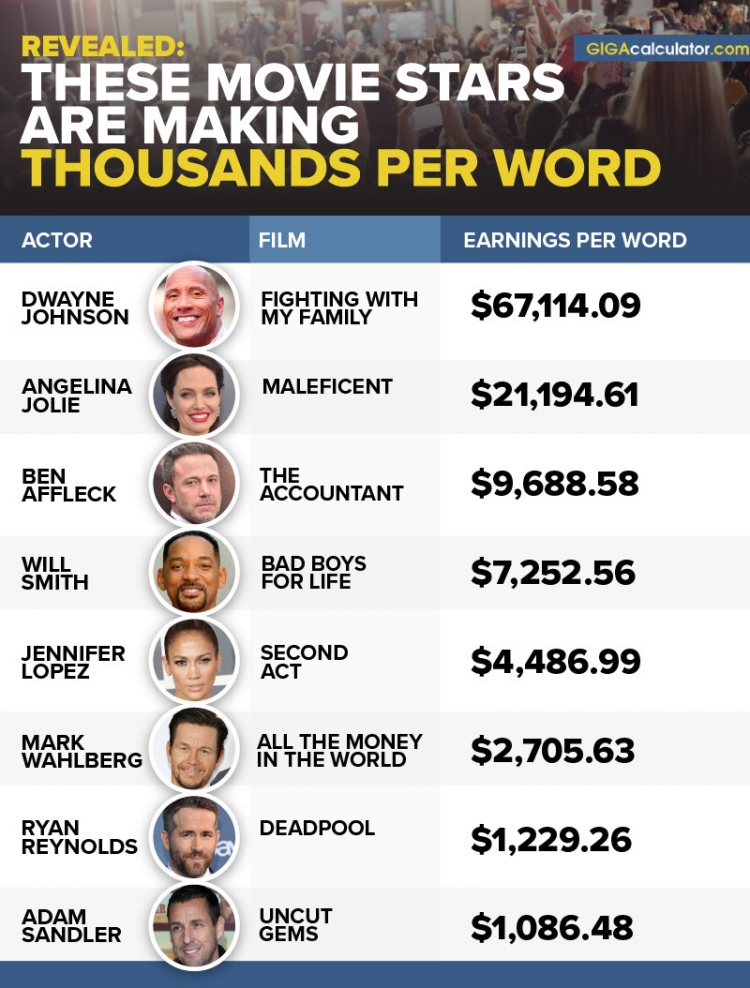 • Dwayne Johnson comes in first, earning $67,114 per word to play himself in the comedy Fighting with My Family
• Angelina Jolie earned $30 million for playing one of the most iconic Disney characters, Maleficent, which equates to $21,194 per word
• The acclaimed stars Ben Affleck, Will Smith and Jennifer Lopez make the top 5
• Adam Sandler comes in last, earning $1,086 per scripted word in Uncut Gems

The millionaire salaries of movie stars fascinate even the least interested moviegoers, making it almost impossible for us to imagine what it's like to have this money in our bank account.
This is especially true when you consider how much the Hollywood A-list make per word!
Gigacalculator.com sought to find out how much movie stars have earned per each word they’re scripted by analysing the movie scripts and salaries of the highest-payed actors and actresses of 2020.
The Results:
From starting with $6 at the beginning of his career to becoming one of the highest-paid actors in 2020, it’s no surprise that Dwayne Johnson is the first on the list. “The Rock” was paid $67,114 per word to play himself in the heart-warming comedy Fighting with My Family last year.
One of Hollywood’s favourite stars, Angelina Jolie comes in second place. The award-winning actress and film director earned $30 million for her role in Maleficent, which equates to $21,194 per word for playing one of Disney’s most iconic characters!
Ranking third is DC Comics most recent Batman, Ben Affleck. The movie star took $14 million to the bank for his lead role in the thriller The Accountant, providing him with $9,688 per word he was scripted.
Will Smith is fourth on the list. Smith made $7,252 per word on his latest film, the third flick of the Bad Boys trilogy, Bad Boys for Life.
Jennifer Lopez makes the top 5, banking $4,486 per word scripted in the romantic comedy Second Act.
In sixth place, Mark Wahlberg earned $2,705 per word for his role in the crime thriller All the Money in the World.
Ryan Reynolds’ salary for the first Deadpool didn’t earn him a giant pay cheque, but it ranks the actor seventh on the list with $1,229 per word scripted.

In last place is the king of comedy Adam Sandler. Netflix’s Uncut Gems may not have been the biggest payday of his career (only $5 million in comparison to his four-film deal with Netflix for $250 million), but he still earned $1,086 per word scripted.

The movie stars selected for this list were taken from the Forbes’ list of The World’s Highest-Paid Celebrities 2020.

The criteria used to choose the actors and actresses’ films was the availability of both film script and salary of their highest-rated films on the website IMDB from 2014 - 2020.

The movie actors Vin Diesel, Jackie Chan, Akshay Kumar and the actress Sofia Vergara were not included in the list due to a shortage of information about their salary and online availability of their film’s scripts.

We hope you find this release useful. If you do end up using it, we would appreciate a link to https://www.gigacalculator.com/, who commissioned the data. A link credit allows us to keep supplying you with future content that you may find useful.

Tweet
Published in Lifestyle
More in this category: « Mulan, Elsa, and Velma: The Animated HEROINES based on your star sign Church chairs »
back to top