CMBlu Energy AG has signed an agreement for the joint development and industrialization of energy converters for organic batteries. 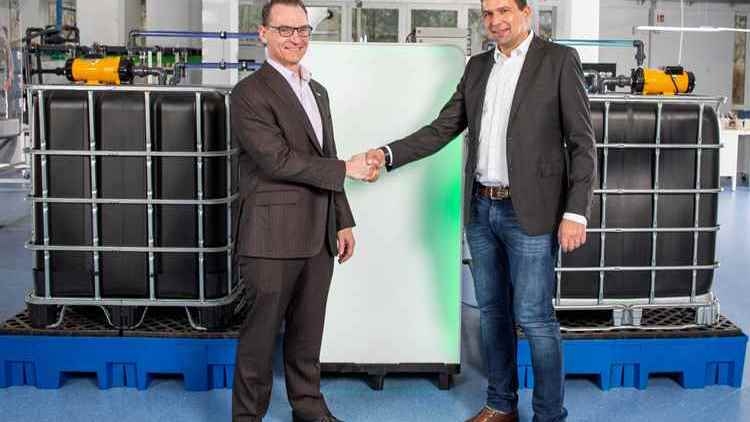 The business idea for redox flow batteries with organic electrolytes

The business idea for redox flow batteries with organic electrolytes derived from lignin (‘Organic Flow’) was already conceived in 2011 and since 2014, CMBlu has carried out intensive research and development. These batteries essentially consist of two tanks of liquid electrolyte and an energy converter, which consists of a large number of adjacent rows of cells and is therefore also referred to as a battery stack. The liquids are pumped through the battery stacks and is charged or discharged as required.

The technology developed by CMBlu has now reached the prototype stage. The further development and industrialization of the battery stack is regulated in the long-term cooperation agreement with MANN+HUMMEL. For this purpose MANN+HUMMEL has created a spin-off named i2M GmbH (innovation-to-market), which is dedicated to the development and commercialization of innovative technologies. In the next step MANN+HUMMEL will build a complete production line in an European plant. CMBlu will realize special pilot projects with reference customers in the next two years. Starting in 2021, CMBlu plans to market the first commercial systems.

Similar to the principle of conventional redox flow batteries, CMBlu’s Organic Flow Batteries store electrical energy in aqueous solutions of organic chemical compounds derived from lignin that are pumped through the energy converter, i.e. battery stack. The special feature of the flow batteries is that the capacity and electrical output can be scaled independently. The number of stacks defines the output of the batteries. A higher number of stacks multiplies the output. The capacity of the battery is only limited by the size of the tanks. This allows flexible customization to take into account the respective application area. For example, solar power can be stored for several hours and then fed into the grid at night.
In order to achieve cost-effective mass production, the most important components in the stack were adjusted to the organic electrolyte. In this process, almost the entire value chain for the stacks can be supplied locally. There is no dependency on imports from other countries. In addition, the battery stacks do not require rare-earth metals or heavy metals. The aqueous electrolytes in the system are not combustible or explosive and can be used safely.

Variety of Applications in the Grid

Organic Flow Batteries are suitable for numerous application areas in the power grid such as the intermediate storage of power from renewable energy generation or in connection with the balancing of demand peaks in industrial companies. An additional application area is the charging infrastructure required for electric mobility. The batteries enable a buffer storage to relieve power grids which do not have to be upgraded for additional loads. It enables simultaneous fast charging of electric vehicles. Ultimately, a decentralized charging network for electric vehicles will only be possible in connection with a high performance and scalable energy storage system.

Nature as a Model for Energy Storage

"Our concept is based on the mode of energy in the human body. In the citric acid cycle the body also uses a redox reaction of organic molecules. We have now succeeded in applying this principle to large-scale storage of electrical energy. For this purpose we use the mostly unused resource of lignin, which is readily available in unlimited quantities and accrues in amounts of millions of tons annually in the pulp and paper industry. Our technology enables a very large and cost effective energy storage system. The battery stack is the core of the system and requires the highest quality and process reliability in the production process. MANN+HUMMEL is a perfect partner in the industrialization process.", explains CMBlu CEO Peter Geigle.

"In line with our strategic initiatives to promote clean air and clean mobility, we were very interested in the technology of CMBlu right from the start. We believe that the expertise, product range and experience of MANN+HUMMEL offer considerable advantages for the production of battery stacks in order to quickly achieve the required performance level and make the technology cost-effective. The manufacture of electrolytes includes a number of filtration steps, which MANN+HUMMEL performs using new special membranes. This technology further expands our product range and at the same time contributes to build the infractruture needed for electric vehicles", says Charles Vaillant, Chief Technology Officer at MANN+HUMMEL. "This also enables us to make a significant contribution towards a sustainable energy transition globally."

Tweet
Published in News EN
More in this category: « An extraordinary adventure in the world of dinosaurs in Réunion Wego in Deal with Korea Tourism Organization to Drive More Travellers to The Country »
back to top