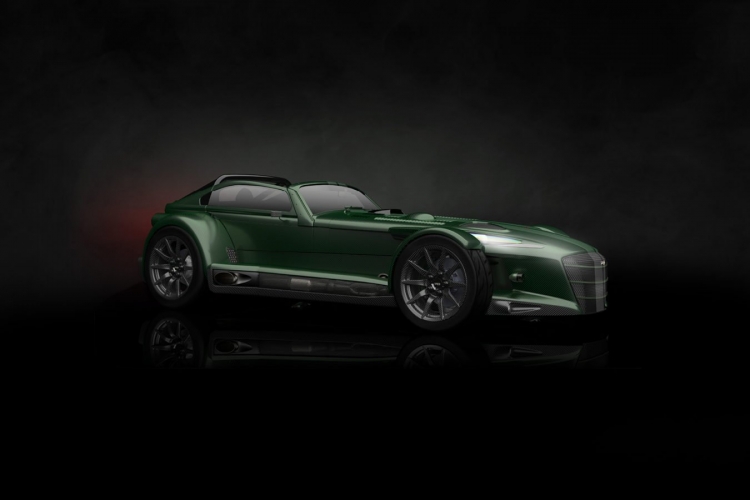 The next installment of the supercar-killing Donkervoort D8 GTO legend will smash through the 2G barrier to deliver the astounding cornering ability to match its crushing acceleration. Developed as a 70th birthday tribute to the Donkervoort Automobielen founder, Joop Donkervoort, the D8 GTO-JD70 will be capable of pulling more than 2G of lateral acceleration in corners, even in its standard trim and on its standard tyres.

It will also accelerate from a standing start at a peak of 1.02G – slightly higher even than the pull of the earth’s gravity on the human body.

Another highlight will be its braking performance, which will peak at an astonishing 1.65G of deceleration on its standard road-legal semi-slick tyres, with even higher braking forces to come with specific track tyres.

“The JD70 has moved beyond the normal measures for acceleration, braking and cornering so we’re using G forces now. The car is a pure driver’s machine like nothing else on the market,” Donkervoort Automobielen managing director Denis Donkervoort said.

“The JD70 is the distillation of everything we know and everything we’ve learned on the road and the racetrack, from track days and from customer talks and, of course, from Joop’s own ideas on what a supercar should be to its driver."

JD70 deliveries are due to begin next spring, and with the car weighing less than 700kg and boasting 415bhp, it will be the most powerful Donkervoort ever made.

Denis Donkervoort said prices would start from €163.636,36 (before tax) and the company already has a significant number of orders from Ambassador customers, long-standing friends of Joop and from conquests from other supercar brands. The international impact of founder’s tribute car is already being felt, with pre-orders from The Netherlands, France, Germany, Spain, Luxembourg and even Lebanon.

“My father built Donkervoort from nothing to what it is today and he deserves a tribute from us on his birthday,” Denis Donkervoort said.

“We will build just one JD70 for each of Joop Donkervoort’s birthdays (so far) and they’ll be the most emotionally engaging sports cars in the world.”

The most powerful Donkervoort ever made, the optimized 2.5-litre, in-line five-cylinder motor will be tuned to generate 415bhp and 520Nm of torque.

It will also do it with enough engineering familiarity to comfort loyal Donkervoort fans and enough raw performance and character to draw in new customers.

The JD70’s exhaust system is completely new, allowing the car to pass the EU6D-Temp emissions rules. Incorporating a new catalyst system, the exhaust exits the side of the car ahead of the rear wheels, which reduces weight, and it has also been tuned to deliver an even more emotional engine sound into the car.

The strength of the engine will be matched to a close-ratio five-speed manual gearbox and the JD70 will be fitted with an all-new type of limited-slip differential, with a taller 1:3.31 final-drive ratio.

Even with all of this speed, the JD70’s official CO2 emissions figure per kilometre will be just 198 grams.

That won’t be the end of the powertrain story, though, because a strong relationship with Bosch has delivered rev-matching software for downshifts and even added a full-throttle upshift mode for harder driving.

The wide-track suspension system will feature adjustable anti-roll bars at each end, with the movement of the custom springs controlled by three-way adjustable shock absorbers.

Aerodynamic improvements, such as a redesigned nose and the cycle-wing wheel covers, will deliver 80kg of rear downforce and 50kg of front downforce.

The louvres built in to the trailing edge of the front cycle wings will release the air that builds up between the tyre and the wing, which raises the top speed of the car while reducing aerodynamic lift.

The new side-pipe exhaust system allowed Donkervoort to redesign the rear underbody section, and the large new diffuser will increase the car’s downforce as well as helping to cool the differential.

More than 95 percent of the D8 GTO-JD70’s bodywork will be made from carbon-fibre, including a significant amount of Donkervoort Automobielen’s lightweight EX-CORE® carbon-fiber technology, the development of which earned the company European Union innovation grant.

EX-CORE® will not only make the JD70 astonishingly light, but immensely strong and fully compliant with the European Community’s Small Series type approval crash regulations.

There are other significant weight-saving strategies, too, including a lightweight lithium-ion battery that saves 7kg over a standard unit.

The new seats are in lightweight carbon-fibre as well, and the quick-release steering wheel is a multi-function unit, which saves both weight an

Tweet
Published in News EN
More in this category: « Why full automation will never be allowed to happen HELIXAFE can detect the solid tumors during the genetic development phase, before they it are even formed. »
back to top