The Most Popular Real-Life Locations That Inspired Famous Books! 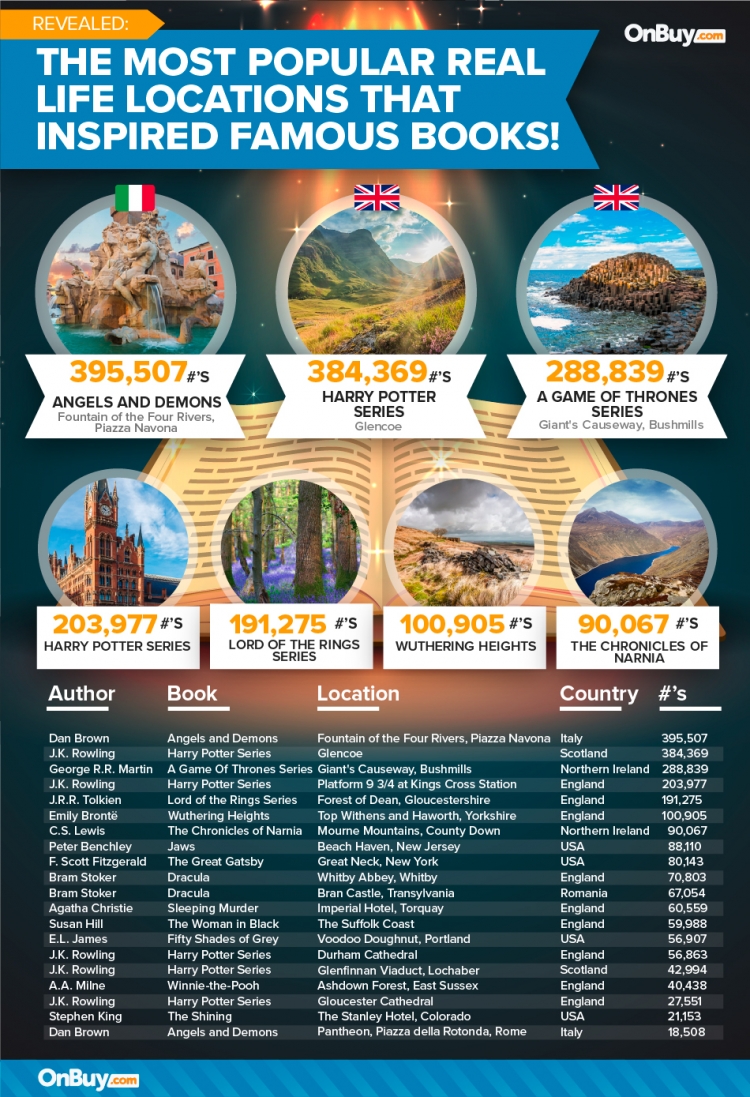 The Most Popular Real-Life Locations That Inspired Famous Books

Although books often transport readers to another world, they are frequently inspired by real-life locations. All great ideas stem from somewhere, and many authors spend months studying to determine the perfect location that inspires a successful and captivating novel.
As a result, OnBuy.com located the destinations that birthed the world most popular books and analysed Instagram activity to discover which is the most popular!

Taking the top spot is Piazza Navona (Fountain of the Four Rivers) in Rome, Italy, which features in Dan Brown’s bestselling mystery-thriller, Angels and Demons. Although this is huge tourist attraction in itself, many visitors attend to follow the footsteps of Robert Langdon and contribute to the fountain’s huge 395,507 hashtags and posts on Instagram.
OnBuy.com found that the second most popular real-life book-related location is Glencoe in Scotland, with 384,369 Instagram hashtags. Author J.K. Rowling convinced thousands of Harry Potter fans to make the trip to see Hagrid’s Hut in Glencoe, making it one of the most visited novel spots!
George R.R. Martin’s Game of Thrones book series was inspired by elements of Giant’s Causeway in Bushmills, Northern Ireland – placing it in third. The world-famous stones have amassed a huge 288,839 hashtags on Instagram.

Platform 9 ¾ at Kings Cross Station (203,977 hashtags), Forest Dean in Gloucestershire (191,275 hashtags) and Top Whitens in Yorkshire (100,905 hashtags) place in fourth, fifth and sixth due to their features that inspired the authors of Harry Potter, Lord of the Rings and Wuthering Heights.

The most influential books are as follows:

The countries with the most appearances:

OnBuy researched different locations around the world that inspired 50 popular and bestselling books. Once the list was complete, OnBuy used Instagram to analyse the locations popularity based on hashtags – using the most popular hashtag of each location, for example #piazzanavona, #glencoe, #gaintscauseway etc. The locations were then ranked based on the number of hashtags they have to determine which is the most popular. All data was collected on 14/08/2020.

We really hope you find this release useful. If you do end up using it, we would very much appreciate a link to https://www.onbuy.com/gb who commissioned the data. A link credit allows us to keep supplying you with future content that you may find useful. Thanks very much!

More in this category: « Bitcoin halving highlights crypto is part of mainstream finance: deVere CEO Welding Boots - Why Are They Important? »
back to top